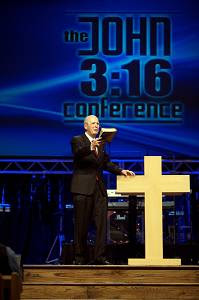 Many believe that Ephesians 2:8 teaches that God arbitrarily bestows faith on a selected few so they can believe and be saved. Nothing could be farther from the truth.

Ephesians 2:8 For by grace you have been saved through faith, and that not of yourselves; it is the gift of God.(NKJV)

Salvation is the gift of God, not faith. The gift God gives is forgiveness from sin.

How do men receive faith?

Romans 10:17 So faith comes from hearing, and hearing by the word of God.(NKJV)

Faith comes from hearing the gospel preached. Faith is not arbitrarily dispatched to a chosen few.

Romans 1:16 For I am not ashamed of the gospel of Christ, for it is the power of God to salvation for everyone who believes, for the Jew first and also for the Greeks,

Salvation is attained by believing the gospel. Salvation is not predetermined by God and forced on a select few by forcing them to have faith and be saved.

1 Corinthians 1:21 For since, in the wisdom of God , it pleased God through the foolishness of the messaged preached to save those who believe.(NKJV)

God saves men through preaching the gospel. God does not preselect men and the force them to have faith so they will be saved.

John 3:36 "He who believes in the Son has everlasting life; and he who does not believe the Son shall not see life, but that the wrath of God abides on him."(NKJV)

If God imputes faith to all who believe, why would those who do not believe receive the wrath of God. Non-believers would have no responsibility nor capability to believed and be saved.

1 John 3:20-23....And this is His commandment: that we we should believe on the name of His Son Jesus Christ and love one another, as He gave us commandment.(NKJV)

Why would God command us to believe on His Son Jesus Christ if we are not capable of believing, unless He arbitrarily bestows that faith on non-believers?

Jesus said "He who believes and is baptized will be saved.."(Mark 16:16) Jesus did not say God will give you the gift of faith so you can believe, be baptized and be saved.


YOU ARE INVITED TO FOLLOW MY CHRISTIAN BLOG. Bing search>>>steve finnell a christian view