The truth about Election that may surprise you 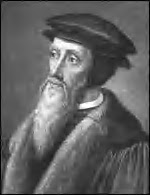 John Calvin writes: “Paul’s words in the first chapter of Ephesians are clear (v.3): Blessed be God who hath blessed us in Christ, according as He hath chosen us before the foundation of the world.” (Concerning the Eternal Predestination of God, p.68, emphasis mine)

Is this the truth about Election? Surprisingly, the answer is "No." It's a misquote that is frequently made among prominent and leading Calvinists, historical and modern.

Well that’s exactly what many prominent and leading Calvinists have done at Ephesians 1:4 when they unintentionally misquote the verse as stating: ‘God chose us before the foundation of the world.’

Ephesians 1:3-4: “Blessed be the God and Father of our Lord Jesus Christ, who has blessed us with every spiritual blessing in the heavenly places in Christ, just as He chose us in Him before the foundation of the world, that we would be holy and blameless before Him.”

Not only has Calvin, and a multitude of leading Calvinists, taken only half of the truth, they've accidentally omitted the most important and the most significant part of the truth at Ephesians 1:4, namely, that it is in Christ that we are chosen before the foundation of the world. Click here for the details that you may find shocking!

Refer to this discussion on Ephesians 1:4 to view the epidemic that has taken place among historical and modern leaders of Calvinism. There you will find a broad spectrum of leading Calvinists who overlook the single most important facet of Election, that is, in Christ, do we have Election. In other words, we are not chosen in the Father in order to become chosen in Christ. Rather, we are chosen in Christ, and on that basis, do with have a legal Adoption in the Father.

You have the priviledge of adoption in the Father as His legally adopted child, purely on the basis of your position in His Son.
Posted by Richard Coords at 3:28 PM 11 comments:

Dialogue on John 6:44 with oldtruth.com

Jim writes: "I'd love to interact with you on all of things on your website, as time allows. Your page on John 6:44 for example, is one of the best 'cart before the horse' examples of eisegesis that I've seen."

Jim also writes: "The scriptural claims made on it are false. And that's not your only page like that, by a long shot. For a detailed commentary on John 6 - see this page. "

I invite you to clarify.