Review of "Calvinism in the Las Vegas Airport" 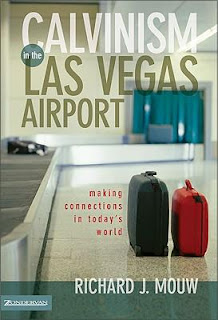 The motivation for this book is an attempt to recognize the way in which Calvinism connects with non-Calvinists, and why those who are Calvinists, do not run away in horror, but zealously embrace its theology. Author, Richard Mouw, recognizes that Calvinism does not always come across well, and best observes this in a movie entitled, Hardcore, in which a Calvinist elder, Jake, explains his TULIP theology to a curious lost woman in a Las Vegas airport, Niki, who in response to an explanation of TULIP Calvinism, exclaims: “I thought I was ****ed up.” (p.13)

Mouw writes: “I have been thinking about writing this book ever since I saw the film Hardcore. A movie with a title like that will not strike most folks as an obvious source of inspiration for some reflections on how to be a Calvinist in the twenty-first century, so I had better explain myself.” (p.11)

(The now Atheist director of Hardcore was raised as a Christian and graduated from Calvin College.)

Mouw writes: “I don’t recommend Hardcore for people seeking spiritual edification. But there is one scene in the film that I have regularly pondered in my own theological reflections. Jake Van Dorn, a pious Calvinist elder played by George C. Scott, is sitting in the Las Vegas airport with a thoroughly pagan young woman named Niki. Jake's teenage daughter has run away to California and gotten involved in the pornography business, and he has set out to find her. His initial efforts thus far have failed, but he has managed to enlist the help of Niki, a young prostitute who knows his daughter. They have just followed a lead in Las Vegas, but having discovered that the wayward daughter is no longer there, they are moving on in their search. ” (p.12)

Mouw writes: “There is no question in my mind that Jake’s Hardcore conversation with Niki was a disaster. You don’t respond to Niki’s curiosity about religion with a mini-lecture about TULIP. But how do you respond?” (p.103)

Mouw laments that he wished the Calvinist character would have been portrayed more charitably, with instead, a “relational evangelism” (p.108), as opposed to just laying out a dry TULIP theology and just surmising that if God chooses to give her an irresistible grace, she will convert.

Mouw explains: “If anything like this is true of Niki’s story, then the worst thing for a Calvinist to do would be to begin by telling her she is a horrible sinner who must repent and straighten out her ways. And that would be the message conveyed by beginning with TULIP, which could easily send her the message that she is a horrible person who may already have been rejected by God from the very foundations of the world. To be sure, her patterns of behavior are grounded in her rebellion against the living God. But in this case that rebellion has produced a life in which there is much loneliness and pain. Rather than going straight to the rebellion, it is a good thing to identify the loneliness and pain in the deep places of her life. Instead of hitting Niki directly with the ‘high Calvinism’ of the TULIP doctrines, I would rather have her hear a compassionate word.” (p.109)

In support, Mouw cites Charles Spurgeon’s use of Invitations (p.46) and sympathetic pleas with the lost. (p.109)

Mouw is very open and honest, which makes the book pleasant to read. Mouw does not defer to Hard Determinism in order to resolve the origin of evil, and instead, frequently differs to Arminian-friendly words such as divine “patience” (p.69) and divine “permission” (p.51), that is, God’s permission of evil events, as opposed to immutably causing them (pp.50-51). As opposed to the idea that prayer changes nothing, but only brings us in line with God, Mouw argues that prayer “is doing something. It is petitioning the Ruler of the universe. It is making our case in the Final Court of Appeals.” (p.61) “We can complain to God rather vigorously about the things we have a hard time accepting.” (p.51) One area in which Mouw gets in trouble is by suggesting that those who perish, do so when they reject God’s “offer” of salvation (p.85), which makes no sense in light of his defense of the “L” in TULIP, which stands for “Limited Atonement.” (p.40) In other words, if Jesus didn’t die for all, but only for a limited number of a pre-selected “elect,” then exactly what is He offering everyone else? Some Calvinists resolve this by insisting that God never “offers” salvation, but simply commands repentance, and those who do so (by Election with Irresistible Grace), receive the benefits of repentance.

I admire Mouw’s perspective on labels. He does not believe in slick marketing by calling himself, “Reformed,” but agrees to the label, “Calvinist,” for distinction's sake. (pp.18-19). I also appreciate the way Mouw is candid about his confusion over apparently conflicting passages in Scripture, as it pertains to Calvinism and Arminianism: “I simply live with both sets of texts, refusing to resolve the tension between what looks like conflicting themes. This is not an altogether comfortable position for me. I would like to be much clearer on the subject, but I really do not know how to proceed further. I can honestly say I’ve made the effort.” (p.42)

It’s always easier to speak with someone who is honest about his own reservations. Nothing is uglier than pride. I recall two Calvinists having a discussion over “problem verses” related to Calvinism, and the one Calvinist insisted, “We have no problem verses.” The other Calvinist insisted that the other was simply in denial. Again, pride is ugly, and Mouw demonstrates strong character.

Mouw is not shy about pointing out the negative stereotypes of Calvinism: “They see this emphasis of God’s sovereign control over all things as encouraging a passive, fatalistic spirit.” (p.51) “There is no denying that a belief that we are predestined to eternal life can lead to a deterministic, even fatalistic, understanding of the Christian life. If it is God who does the choosing, then we may be tempted to think that our own choosing, our own responding to God, is a charade. It is all preprogrammed. But Calvinist theologians go out of their way to deny this implication.” (p.66) “The idea of Election has often been wedded to a belief in a remnant, a faithful minority—tied to a sense that God has bypassed the vast majority of the human race and bestowed his saving mercies on a small number. Often this perspective seems to be worn as a badge of honor—as though Calvinists have a right to take pride in the fact that God has chosen them over most other members of the human race.” (p.84) “Calvinists have certainly not stood out in the Christian community as especially pure people when it comes to the way they behave. They have frequently been intolerant, sometimes to the point of taking abusive and violent action toward people with whom they have disagreed. They have often promoted racist policies. And the fact that they have often defended these things by appealing directly to Calvinist teachings suggests that at least something in these patterns may be due to some weakness in the Calvinist perspective itself.” (pp.114-115) “But I also see tendencies in my own Calvinism that make me nervous. Christians who specialize in free-will-centered theologies, for example, typically do a much better job at evangelism than Calvinists do.” (p.119)

Mouw encourages tolerance and acceptance of non-Calvinist Christians when he states: “Rather than insisting that only Calvinists are genuine Christians, I prefer to think that Calvinism best captures experiences and concerns that are at work in the lives of everyone who knows what it’s like to plead for divine mercy out of a recognition of our own unworthiness.” (p.118)