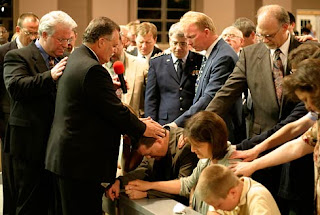 Acts 13:44-48 states: “And the next sabbath day came almost the whole city together to hear the word of God. 45 But when the Jews saw the multitudes, they were filled with envy, and spake against those things which were spoken by Paul, contradicting and blaspheming. 46 Then Paul and Barnabas waxed bold, and said, ‘It was necessary that the word of God should first have been spoken to you: but seeing ye put it from you, and judge yourselves unworthy of everlasting life, lo, we turn to the Gentiles. 47 For so hath the Lord commanded us, saying, “I have set thee to be a light of the Gentiles, that thou shouldest be for salvation unto the ends of the earth.”’ 48 And when the Gentiles heard this, they were glad, and glorified the word of the Lord: and as many as were ordained to eternal life believed.”

Q1: When does this passage say that these were “ordained to eternal life”?

Q2: What does this passage say that it means to be “ordained to eternal life”?

This passage doesn't answer when, nor does it define what the phrase means. Most Calvinists will point out that at least we know that believing follows the ordination, and that's true, and Arminians agree that the new birth instills within us, a nature that not only implants the desire to want to do the things of God, but also instills a measure of faith, necessary to fulfull each Christian's assigned vocation within the Body of Christ.

The picture above is of ministers and their wives praying for a newly ordained minister. Sometimes Calvinists give people the impression that there is only one type of ordination, and that being a fore-ordination, but such is not the case within our own process of ordaining ministers. Consider Acts 14:23 which states: “And when they had ordained them elders in every church, and had prayed with fasting, they commended them to the Lord, on whom they believed.” This is a present-tense ordination. However, consider three verses which explicitly reference an eternal aspect of ordination, and notice how the Bible writers make the eternal aspect unmistakable. Ephesians 2:10 describes a “before” ordination. Jude 4 describes an “of old” ordination (Jude 4) and 1st Peter 1:20 describes a “foreordination.” (1st Peter 1:20) Therefore, if Luke had wished to make it clear that Acts 13:48 had a pre-ordination in mind, he could have said: 1) foreordained to eternal life, 2) ordained of old unto eternal life, or 3) before ordained to eternal life. If Luke had intended an eternal ordination at Luke 13:48, why didn't he use any of the aforementioned methods?

I believe that being ordained to eternal life speaks of when the Holy Spirit seals a person in Christ, that is, when a person is made Born Again, and is made a New Creature in Christ. Therefore, I infer Acts 13:48 to mean that, as many of these Gentiles as had been made Born Again, believed.

However, the way that a Calvinist approaches Acts 13:48 is with the perspective that there a two classes of humans, that is, one class of eternally elect sheep contrasted by a class of eternally non-elect goats. Therefore, if a Calvinist infers Acts 13:48 to mean that as many as were foreordained to eternal life, believed, it must also mean that if any did not believe, after having heard that sermon, they must not be what?, a foreordained eternally elect sheep. Therefore, the Calvinist must infer there could not have been anyone there among that crowd who disbelieved on that day, but who later did repent and became saved. Think for just a moment about how absurd that would be, and how unrepresentative it would be of evangelism. For even the apostle Paul himself, initially disbelieved after hearing the sermon of the martyr, Stephen.

Posted by Richard Coords at 3:28 AM 5 comments: