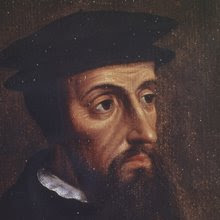 In terms of Total Depravity, the Calvinist says that the solution to man’s depraved nature is divine intervention. Arminians couldn’t agree more! It’s how God intervenes, that separates Calvinists from Arminians. Does God’s intervention include full blown regeneration, with the indwelling of the Holy Spirit? Or, does God reserve full blown regeneration for the believer in Christ? Based upon Eph. 1:13, I contend for the latter, but I don’t doubt that a Calvinist can provide their own slant on that verse, as even Calvin himself had, by imagining a two-fold application of the Holy Spirit. So if God does not intervene with full blown regeneration, how else could He possibly bring the unregenerate, dead rebel sinner to a place where they are able to receive His free gift of grace? How, exactly, does Prevenient Grace work? I like how Paul described it at Acts 26:14. Now, before Calvinists say that it is 100%, absolutely impossible for God to be able to bring an unregenerate, dead rebel sinner to a point where they can receive His free gift of grace, they ought to consider something that John Calvin suggested. Calvin postulated how some people can live a life of thinking that they are one of the exclusive, Calvinistically elect, when yet they would later go on to fall away from the faith, and prove that they were not one of the Calvinistically elect after all. Here is what Calvin reasons:

John Calvin explains: “Let no one think that those [who] fall away...were of the predestined, called according to the purpose and truly sons of the promise. For those who appear to live piously may be called sons of God; but since they will eventually live impiously and die in that impiety, God does call them sons in His foreknowledge. There are sons of God who do not yet appear so to us, but now do so to God; and there are those who, on account of some arrogated or temporal grace, are called so by us, but are not so to God.” (Concerning the Eternal Predestination of God, p.66, emphasis mine)

What kind of grace was that again? That arrogated grace sounds like a non-regenerative, Prevenient Grace? No?

Calvin adds: “Yet sometimes he also causes those whom he illumines only for a time to partake of it; then he justly forsakes them on account of their ungratefulness and strikes them with even greater blindness.” (Institutes of Christian Religion, 3.24.8, emphasis mine)

“Illumes only for a time.” What kind of arrogated illumination is that? That sounds a lot like Prevenient Grace. Surely it’s not regeneration, since regeneration and the Indwelling of the Holy Spirit is apparently reserved only for the Calvinistically elect. So is John Calvin showing that an unregenerate, dead rebel sinner can be illumed with an arrogated grace which allows him, for a time, to overcome Total Depravity? So even though they suffer from Total Depravity, by God’s power, and without full blown regeneration, God has the power to breach their Total Depravity, and bring them to a place of illumination.

So what if God should “illume” someone with such an “arrogated grace” so that a person could be brought to the point where they are able to receive Christ’s free gift of grace, and thus as a converted believer, receive the regeneration and indwelling that is alone reserved in Christ, as Arminianism proposes? Ultimately, it seems like John Calvin has opened up a logical door to Arminian, Prevenient Grace. No? To me, it looks that John Calvin has proposed a way in which God could breach an unregenerate, dead rebel sinner's Total Depravity, through an arrogated illumination.

Posted by Richard Coords at 5:06 PM No comments: