Federal Headship: In the Father 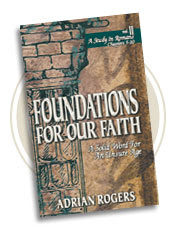 Adrian Rogers has two quotes that I'd like to highlight:

Adrian Rogers explains: “In Adam, we became the enemies of God, deserving His wrath. ... Everyone who remains in Adam will face the wrath of God. ... In Adam we sin and collect our wages (death), but in Christ we are forgiven and collect our free gift (eternal life). This is the much more of God’s grace. ... Make sure today that you have abandoned Adam and accepted Jesus. There is much more in Him, both now and for eternity.” (Foundations for our Faith, Vol.II, A Study In romans Chapters 5-9, pp.15, 17)

Rogers adds: “When you lay your sins upon Jesus, you become a child of the King, righteous in His sight, and justified by His blood. Friend, we gain much more in Christ than we ever lost in Adam.” (Foundations for our Faith, Vol.II, A Study In romans Chapters 5-9, p.16)

John Calvin writes: “First he points out the eternity of election, and then how we should think of it. Christ says that the elect always belonged to God. God therefore distinguishes them from the reprobate, not by faith, nor by any merit, but by pure grace; for while they are far away from him, he regards them in secret as his own.” (John: Calvin, The Crossway Classic Commentaries, p.393)

The other side of the Coin

Hello everyone,
I've not posted in a while because of my busy job handling insurance claims for Hurricane Ike. However, I wanted to drop in and cite an article that I found interesting.
http://www.foxnews.com/story/0,2933,444715,00.html
http://www.livenews.com.au/Articles/2008/10/29/Jesus_was_not_God_priest_sparks_Catholic_controversy
An Australian Catholic Priest, Peter Dresser, has written a book entitled: "God Is Big. Real Big", in an attempt to clear up, what he feels are errors in Christian religion. Highlighted in these alleged errors, includes his rejection of the deity, virgin birth and bodily resurrection of Jesus Christ.
Most notably, he states: "No human being can ever be God, and Jesus was a human being. It is as simple as that." When he says that no human being could ever be God, what he's really saying is that God could never be a human being. He's ignoring the flipside to his argument and presumed a restriction upon the power of God to condescend to the human level, and in doing so, declares the matter settled. In essence, he's set out to make "sense" of the very thing that he rejects, and thus he must entirely redefine "Christianity" into Humanism, in order create a brand of Christianity that appeals to his human senses.
The relevance is that I've had a similar argument against Calvinism, insomuch that Calvinists sometimes overlook the flipside to their own arguments. Here is one:
What's the flipside? God is so limited, that He is forced to use an Irresistible Grace. It's not a matter of God "won't" use an alternative, but that God "can't" use an alternative, because the very moment that a Calvinist admits that it's a matter of preference (i.e. won't use an alternative but could), then they have created a logical basis for Arminian "Prevenient Grace." Most Calvinists will simply say, "You just don't understand the extent to human depravity." Actually, I do understand it, just as I also understand the extent of the power of God to ovecome it by alternative means, an alternative which you entirely reject, borne entirely out of theological bias.
Posted by Richard Coords at 10:27 AM No comments: