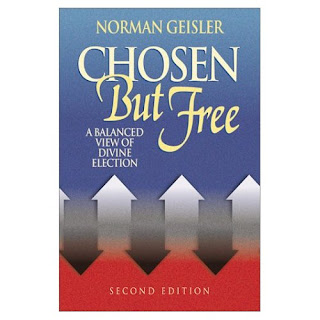 Now I know what Richard Land was talking about, when he referenced his understanding of Election as being a “congruent election,” at the John 3:16 Conference. This principle is taken straight from the Compatibilist, Norman Geisler, who describes a “congruency between predetermination and free choice.” (p.42)

Repeatedly we are told by Geisler, that Determinism and Free Will are perfectly compatible concepts. Echoing Calvinist, Charles Spurgeon, Geisler states: “God’s predestination and human free choice are a mystery, but not a contradiction. They go beyond reason, but not against reason. That is, they are not incongruous (there’s that word again), but neither can we see exactly how they are complementary. We apprehend each as true, but we do not comprehend how both are true.” (p.54) This is precisely what Spurgeon stated, when he similarly affirmed the mystery of Determinism & Free Will:

Spurgeon: “Now, have I not answered these two questions honestly? I have endeavoured to give a scriptural reason for the dealings of God with man. He saves man by grace, and if men perish they perish justly by their own fault. ‘How,’ says some one, ‘do you reconcile these two doctrines?’ My dear brethren, I never reconcile two friends, never. These two doctrines are friends with one another; for they are both in God’s Word, and I shall not attempt to reconcile them. If you show me that they are enemies, then I will reconcile them. ‘But,’ says one, ‘there is a great deal of difficulty about them.’ Will you tell me what truth there is that has not difficulty about it? ‘But,’ he says, ‘I do not see it.’ Well, I do not ask you to see it; I ask you to believe it. There are many things in God’s Word that are difficult, and that I cannot see, but they are there, and I believe them. I cannot see how God can be omnipotent and man be free; but it is so, and I believe it. ‘Well,’ says one, ‘I cannot understand it.’ My answer is, I am bound to make it as plain as I can, but if you have not any understanding, I cannot give you any; there I must leave it. But then, again, it is not a matter of understanding; it is a matter of faith. These two things are true; I do not see that they at all differ. However, if they did, I should say, if they appear to contradict one another, they do not really do so, because God never contradicts himself. And I should think in this I exhibited the power of my faith in God, that I could believe him, even when his word seemed to be contradictory. That is faith.” (Jacob & Esau)

Geisler: “There is no contradiction in God knowingly predetermining and predeterminately knowing from all eternity precisely what we would do with our free acts. For God determined that moral creatures would do things freely. He did not determine that they would be forced to perform free acts. What is forced is not free, and what is free is not forced. IN BRIEF, WE ARE CHOSEN BUT FREE.” (p.55)

This is essentially Compatibilism, and it’s certainly not Arminian, and absolutely Calvinistic, and hence Geisler refers to himself as a “Moderate Calvinist.” In contrast, Geisler refers to Calvinist, R.C. Sproul, as an “Extreme Calvinist” (p.68), for rejecting the free agency of man. However, the joke is that both are Compatibilists! Sproul decries the “equal ultimacy” of what he terms, “hyper-Calvinists” or “anti-Calvinists” (Chosen By God, p.142). Sproul is not a Hard Determinist, and for that matter, neither is Calvinist, James White, who is a self-professed Compatibilist, who wrote the “Potter’s Freedom” in refutation to Geisler’s supposed Arminianism. The whole thing is one big charade, very much like the “free choice” of Compatibilism, in which free choice is made consistent with what is Determined, by eliminating all other “free” choices to only that which just so happens to be predetermined. That is hardly consistent with the “power of contrary choice.” Here is a caricature of this notion: “Sure they have Free Will. They have the freedom to do everything that they have been predetermined to do. See, we Determinists believe in Free Will too.”

Geisler espouses the same views as any Calvinist would at John 1:13 (pp.51-52) and Romans 9:16 (p.52), and thus rejects Arminianism as follows: “...if God’s choice to save was based upon those who choose Him, then it would not be based upon divine grace but would be based on human decisions.” (p.51) Notice what Geisler pits grace against: human choice. And what is human choice? He then goes on to reject Irresistible Grace (pp.47-48), and none of this is contradictory mind you. The “Extreme Calvinist” gets a nice helping of John 3:16 (p.50), as well as a terrific analogy against Preterition, in the form of a farmer illustration (p.50), which was disputed by James White at youtube. However, instead of redefining Geisler’s illustration, White should have tried to defend how letting the other two boys drown, can in any way, still be a genuine act of love, compassion and kindness, because the impression that Geisler had attempted to convey, is that casual indifference is not any “kind,” “level” or “type of love.” This is why there are aspects of what Geisler had stated, that both sides of the debate can agree with. 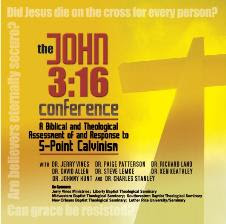 If you have either attended or listened to the Conference, please grade the presenters.

David Allen and Ken Keathley absolutely hit home runs. Buy the DVD and see for yourself. However, take notes. They move fast.

Richard Land gave an enjoyable presentation on Unconditional Election (which I wish that he had gone on longer), arguing for a "congruent election" (that is, congruent with Scripture), from the "eternal now" perspective of C.S. Lewis, but his argument for how his view successfully bridged the sovereignty of God and the free will of man, was mostly left undeveloped. Land disputed that one is saved by faith, but instead by a "God-completed faith." Land cited God's foreknowledge, and his eternal relationship with the "elect" vs. "non-elect." In those terms, Land raises the dichotomy between "will be saved" vs. "must be saved," but again, did not develop that point as much as I would have preferred. Land contrasted the Abrahamic Election of the Old Testament with the Salvific Election of the New Testament, in relation to Romans chapters 9-11, citing Harry Ironside for support, but his presentation was very light on Scriptural analysis. There probably should have been two speakers to address this topic. Neverthess, Land gave a fine historical presentation of Baptist history, including the impact of Sandy Creek. Land gets a negative mark for stating that a person cannot believe in Eternal Security and simultaneously be an Arminian (especially in light of the articles of the Remonstrance).

Ken Keathley really hammered home on the impact of "Perseverance of the Saints," in terms of the "temporary faith" taught by Beza (his predacessor, John Calvin, similarly taught "temporal grace") and it's historical impact upon the Puritans. Keathley pointed out that assurance comes from the revealed word of God, rather than the presumption of election, and thus with Calvinistic election, the Calvinist is logically denied assurance. Keathley uses an excellent example of Job, in terms that Job did not rely upon his experiences for assurance, but upon the revealed word of God. I also found his summarization of the Universalist, Karl Barth, and his connection to supralasarian Calvinism, to be quite fascinating.

David Allen entirely quoted Calvinists in his presentation, and revealed that 5-Point Calvinism was actually rejected by the founders of Calvinism. He really did a good job in analyzing John Owen, though I was disappointed that he ran out of time before getting into Own's "double jeopardy" argument. Neverthless, Allen provided follow-up research material via web links. However, what I found most interesting was his discussion on the Westminster minutes, concerning the internal debate over Limited Atonement. Allen moved at such a brisk pace that even the microphone couldn't keep up, and required emergency replacement. This presentation was a homerun for the John 3:16 Conference. I particularly liked his argument on 1st Corinthians 15:3, which is absolutely crippling to 5-Point Calvinism.

Steve Lemke tackled "Irresistibe Grace" by highlighting Scriptural references to the grace of the Holy Spirit being resisted. He did a good job of pointing out that the Calvinist belief on Irresistible Grace constitutes preemptive regeneration and preemptive new birth, though he did not get into what I feel is the real heart of the matter, namely, that Calvinists believe that they must be "in Christ" preemptively, in order to irresistibly "believe in Christ." Nevertheless, credit Lemke for digging into Scripture, though he did wander off topic a bit, such as raising the issue of 1 John 2:1.

Paige Patterson did not cite Church history, no quotes from Calvinists or non-Calvinists, did not get into the logical implications of Calvinists (in terms of Total Depravity extending to Total Inability), did not discuss the controversy of Total Depravity between non-Calvinists and Calvinists, was relatively light in Scriptural analysis (despite reading Romans chapters 1-3), and his illustrations primarily were never developed, and some were more embarrassing than others (i.e. illustration of Abraham and Sarah, and nakedness in the Garden of Eden). It seemed that very little research was put into this presentation, and was by far the most disappointing. I hope that he gets a chance at redemption with a do-over in a future conference.

Jerry Vines was a terrific Bible Teacher in really digging into the meat of John 3:16, and addressed the Calvinist interpretations of the famous passage. He was so excited to speak on the matter, that he ran way over time, but his passion on the matter was a joy to witness.

Johnny Hunt spoke on evangelism and obedience to God.

The Q&A session turned into a testimonial session, and which had to be cut short. There was too much griping and venting, and not enough Q&A. Perhaps next time, a moderator will need to be utilized. In that event, questions from the audience can be written on index cards, and then be presented by the Moderator to the Speakers.

Posted by Richard Coords at 4:22 AM 5 comments: